Producing high-quality food is not always enough; sometimes growers and processers need help connecting with the right markets for their products. That was the impetus behind the creation of Fifth Season Cooperative. A food and farm assessment in 2008 by the Valley Stewardship Network showed the need for an organization that would introduce Wisconsin food products to markets throughout the Midwest. Fifth Season Cooperative was created in 2010 when the Vernon County Economic Development Association obtained a $40,000 Buy Local Buy Wisconsin grant from the Wisconsin Department of Agriculture, Trade and Consumer Protection. 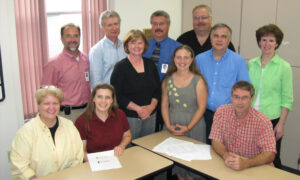 Fifth Season Cooperative’s mission is “to produce, process and market healthy, local foods in our region by supporting the values of environmental, social and economic fairness for all.” Its name is derived from the long-held concept of a “fifth season” for agriculture that involved various ways of preserving food to make it last beyond the harvest season. The Fifth Season Cooperative established the infrastructure and coordination to bridge the gap between food producers and food buyers in the 7 Rivers Region, which includes much of the western Wisconsin Driftless Region and adjacent counties in eastern Minnesota and northeastern Iowa. Based in the Food Enterprise Center in Viroqua, the co-op sources locally, sustainably grown food and value-added food products and coordinates their sale and distribution through retail and wholesale networks and through community-supported agriculture.

Produce began moving through Fifth Season Cooperative in summer 2012. In 2014, grants from the U.S. Department of Agriculture allowed the co-op to develop two frozen vegetable blend products to serve hospital and school foodservice operations and to promote the products in the Chicago area. Fifth Season Cooperative now includes more than 40 members—farmers, processors and distributors.

Farmers in western Wisconsin were growing high-quality produce, —but without networks and a distribution center, they had no way to sell to bigger markets in the region.

Fifth Season Cooperative was established, through efforts of the Vernon Economic Development Association and the Valley Stewardship Network, to bridge the gap between farmers and food producers in the Driftless Region and buyers around the Midwest.