Mass transit is the ticket 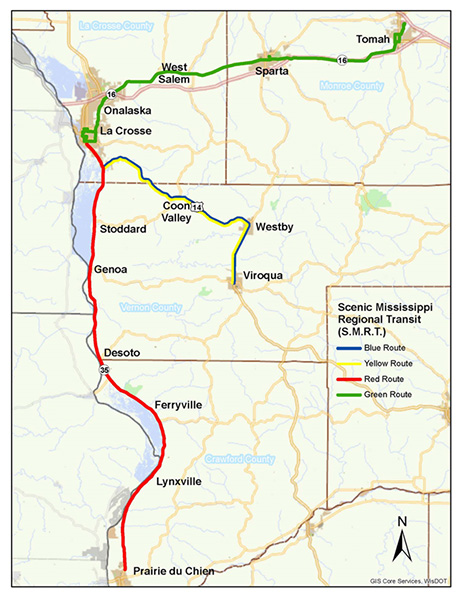 Southwest Wisconsin features scenic views from lazy roads that curl through the bluffs overlooking the Mississippi River. For people living in the rural hills and valleys, though, there was no easy way to get to work, school or appointments, and few options for joint travel to reduce fuel emissions. Elderly and disabled people needed inexpensive transportation options—so did students, employees and even tourists. Bus service could be a solution, but it would take a lot of cooperation—and money—to provide an efficient and effective transit system that would serve long routes over often-challenging terrain.

A study confirmed that bus service in a three-county area of southwest Wisconsin could be feasible. Initial partners were the Mississippi River Regional Planning Commission, City of Prairie du Chien, Crawford County and the Wisconsin Department of Transportation (DOT) and grew to include La Crosse and Vernon counties. Together, they worked to build relationships with local municipalities and businesses and to apply for grants and other funds. And then came the vehicles: Three 26-passenger accessible buses were purchased by the city of Prairie du Chien, with primary funds from the Wisconsin DOT, and Viroqua-based Running Inc. was hired to operate the passenger service.