David Fleming Sr. lives in New Post, a tiny village near Hayward in northern Wisconsin, that has “a fire department and a church—and that’s it.”

New Post is where David grew up, on the Lac Courte Oreilles Reservation, in a clump of eight houses “and nobody else for miles.” The nearest grocery store was 30 minutes away, and the bus ride to school took an hour.

“My playgrounds and streets were forests and streams,” he says.

As a member of the Lac Courte Oreilles Band of Lake Superior Ojibwe, David has always experienced nature as a dominant force in his life. The reservation lies in the center of Sawyer County, which is known for its abundance of lakes, hardwood forests and wildlife, and roads dotted with signs that caution motorists to watch for “elk crossing” or “Bigfoot crossing.” 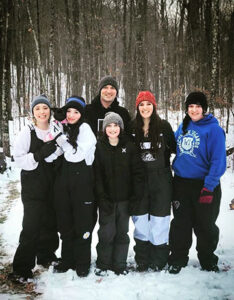 David Fleming and his family enjoying a winter day in northern Wisconsin.

For David, summers were spent swimming in the lakes, riding bikes and fishing. During the winters, there were hikes through the forest to gather firewood.

During his teenage years, traditional tribal activities were part of the fun: Powwows on Fridays, trips to the sugar bush in the spring to make maple syrup, and crafts that included beading and wigwam making.

One of David’s first jobs was as a counselor at PEP (short for Preventive Education Project), a healthy lifestyles program that offered activities such as volleyball and softball, weightlifting and board games as a way to keep tribal youths engaged in positive pursuits after school, on weekends and during the summer.

That may have foreshadowed his future career, which has focused on efforts to expand opportunities for tribal members and all of northern Wisconsin, as well as “helping to find solutions for stubborn rural problems.”

David’s approach mirrors the way tribal communities operate—seeking good outcomes for the community, as a whole: a collective success rather than an individual triumph.

“Entrepreneurship in tribal communities is about solving a problem, not necessarily making a dollar. It works toward things that benefit the community as a whole, versus me as an individual,” he says.

David joined WEDC’s Office of Rural Prosperity (ORP) in January 2022 as a program specialist with Revitalizing Economic Vibrancy After a Major Pandemic (REVAMP). He wanted the job because he liked the agency’s title.

“The name of the office—Rural Prosperity—was intriguing to me. I felt it was work that aligned with my career path,” he says.

David has a bachelor’s degree in business from the University of Wisconsin-Superior and an master’s in business administration from UW-Eau Claire. He had been a business instructor at the Lac Courte Oreilles Ojibwe College in Hayward, one of two tribal colleges in Wisconsin, where he developed a bachelor’s degree program in business. Classes included subjects such as problem solving for entrepreneurs and innovation and creativity. Another course, Economies of Reservations, dealt with the unique circumstances facing tribal communities, such as the laws affecting reservations, policies of the U.S. Bureau of Indian Affairs, and economic challenges that persist today. 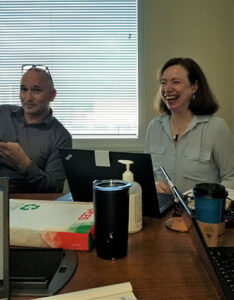 David shares a lighter moment with colleague Danielle Jones at a staff gathering.

“Tailoring a post-secondary education program to the needs of tribal members in northern Wisconsin was something that had not been done before,” David says. “The curriculum reflected things they needed to know.”

David also knows what it’s like to be an entrepreneur. Before his teaching stint, he served as business manager for the Lac Courte Oreilles for several years and then took over management of a grocery store serving the reservation, transforming it into a profitable operation within two years. He’s also owned a couple of coffee shops and started a small business loan fund.

With a business and academic background and a history in the tribal community, the ORP position gives him “something (new) to contribute, and helps me learn more about things I find to be of interest.”

Within ORP, David covers northern Wisconsin, from about Eau Claire and Wausau north, including Wisconsin’s 11 tribes.

His first mission was to reach out to the tribes and to let northern Wisconsin’s rural communities know that ORP exists. He has been meeting with local government leaders and tribal planners, working to identify the needs of the area, to analyze where roadblocks are preventing opportunities from flowing into the communities, and to connect residents with resources and help them apply for grants.

“A state official was having a hard time reaching tribal communities to discuss housing issues. I found the contact and made the connection,” David says. At a career fair in Drummond, a town board member from Iron River told David he hasn’t had the opportunity to meet with many state officials. “Talking about WEDC was a unique change for him. People are really thankful to hear about the office and what we’re trying to do.”

David is working to build relationships so he can better assist rural communities. “Relationships are more than contacts in a database. A lot of the time, they are about getting comfortable with people so that they will contact you It is about positioning the ORP as a resource for people.”

Lessons from the COVID-19 pandemic are still becoming clear, says David: “What new challenges have emerged and what are we seeing for best practices? And how do we help communities deal with this new normal? Some industries seem to be enjoying a boom while others are still struggling.  In northern Wisconsin, tourism is doing well and local retail businesses are happy with the traffic but they are short on staff.” A report is expected next summer.

David also is trying to figure out how ORP might be able to help grocery stores survive in northern Wisconsin. “We know that small grocery stores have been facing the prospect of closing in the area. In rural communities, grocery stores are a lifeline to healthy foods Currently, our efforts are around determining what managers of rural grocery stores think are their biggest challenges. Once we have a better idea of the key issues, we will seek solutions,” he says.

David’s largest project so far involves plans for business development and incubators via funding opportunities for tribal communities from the U.S. Treasury Department and the Bureau of Indian Affairs. “I was able to provide technical assistance by participating in planning sessions that resulted in new strategies, plans and partnerships,” he says.

Getting to know David Fleming behind the scenes 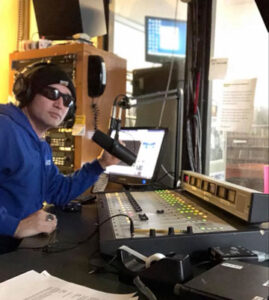 Hobbies: Gardening in the summer; snowboarding and ice fishing in the winter; reading—especially fantasy novels—year-round; plays guitar and serves as a DJ at least once a month for an afternoon music program on WOJB, 88.9 FM, a Lac Courte Oreilles Ojibwa Public Broadcasting station

Early ambitions: When David was growing up, he wanted to be an architect, designing big buildings “like the giant, twisty ones they have now.” Then he turned to art—but, concerned about being able to make a living, he switched to business to “be my own boss.”

Art: Woodblock printmaking; prints of his family and still lifes hang throughout his home.

Favorite foods: Minocqua Save More Marketplace’s chicken pot pie—and in his own cooking, David is known for his potato salad. The secret: “You’ve got to get the right pickle.”

Favorite food in his youth: Pickles and mayo sandwiches with dill on white bread

How weird are you? “Nine out of 10 stars … I’ve always shared the philosophy of Kurt Cobain: ‘They laugh at me because I’m different; I laugh at them because they’re all the same.’ You need to be a little different to be more innovative.”

ORP is the largest organization David has worked for, and he is optimistic that it will help to bring parity to rural Wisconsin in areas such as quality health care, good jobs, transportation and child care: “The idea that this office will help make rural life more enjoyable and more sustainable—that’s exciting to me.”