Kietra Olson lives in the house she grew up in, a two-story, timber frame home between Middleton and Cross Plains, in the unincorporated community of Ashton.

It’s not that she never left. Kietra attended the University of Wisconsin-Milwaukee, earned her bachelor’s degree in science and natural resources from UW-Stevens Point, and then lived on Madison’s northeast side for several years.

But when her parents decided to downsize and sell the country home they had built, Kietra snapped it up. “I missed seeing the stars at night and hearing the coyotes in the woods,” she says. “I never thought I’d move back, but it’s been the best.” 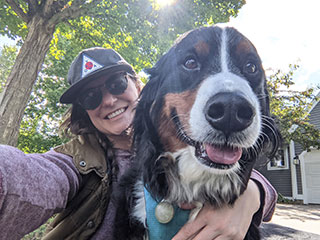 Not only does the home keep Kietra close to her roots, it provides plenty of space to run for Mürren, her Bernese mountain dog—named after a Swiss mountain village, a place that Kietra and her family visited years ago.

Kietra joined the WEDC’s Office of Rural Prosperity (ORP) in February 2021 as Rural Initiatives Manager, and calls it “the best job I’ve ever had.

Growing up in Ashton, Kietra attended Springfield Elementary School, which consisted of a four-classroom building with two adjacent trailers and a separate gym that doubled as a cafeteria, in Springfield Corners. For some of the students, the ride to school was not on a bus but on a tractor seat. The tiny K-6 school—part of the Middleton-Cross Plains School District—was almost an afterthought, Kietra says: “Sometimes, they’d forget to send our lunch.”

The community was populated primarily by half a dozen families who had farmed there for generations, many of whom remain, even today, and make up much of the town board.

“I love that. What resonates with me about rural communities is that tight-knit culture. It feels like a family because half of the town is a family,” Kietra says.

From food to the arts

Before her current job, Kietra was the local food specialist for the Wisconsin Department of Agriculture, Trade and Consumer Protection. Her focus was not the state’s heritage dairy farming industry, but rather, the less conventional aspects of agriculture. She worked with beginning farmers, small food processors and community-supported agriculture (CSA) farms, helping with marketing and finding markets for them.

She helped launch the Edible Startup Summit, a conference aimed at entrepreneurs planning to start food-related businesses in Wisconsin, to guide them with business planning, familiarize them with resources and offer a chance for networking.

Within ORP, Kietra’s role is to raise the profile of the state’s rural communities. “I was one of those kids who were always in trouble for talking too much in class,” she says. “Now, I talk to as many people as I can, hear what they’re doing and what they need, and figure out how our team can support them.”

One of Kietra’s projects is to establish a creative placemaking initiative for Wisconsin that would bring together nonprofits throughout the creative economy. The effort could range from filmmakers to web designers, from potters to dance troupes, and from community gardeners to historical societies. “I think the creative economy is really important and hasn’t always been at the economic development table. Without it, communities lose their uniqueness,” she says.

With tours that demonstrate the intersection of art and agriculture, the Wormfarm Institute is one of the best examples of the creative economy, Kietra says. Based in Reedsburg, Wormfarm offers studio retreats to artists and writers who, in turn, work on a CSA farm. Wormfarm also hosts biennial drive-by art tours through Sauk County farm country, featuring hay bale sculptures, poetry readings and interactive workshops.

Kietra hopes to help rural communities define what makes them special and come up with ways to display those traits, to give residents a sense of pride and to provide reasons for tourists to visit.

“Helping communities identify their uniqueness and championing it really gets me excited,” she says. “Sometimes you need someone to say you look really nice today. Communities need that, too.” 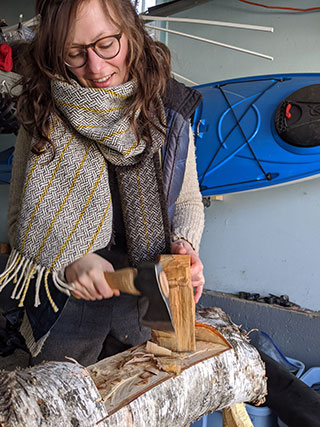 Weaving the fabric of rural Wisconsin

What has surprised Kietra about her job is the impact it has had on her, she says: “I get inspired when I go into communities and work with them. It’s inspiring and intriguing to see how unique each community is, and how it is going about trying to solve problems. It weaves this psychedelic but strong fabric in the state. I love that.”

In the Dodge County village of Hustisford, for example, Kietra has led community members of all sorts—from the village president, police and fire chiefs to the business leaders, youths and elders—in planning sessions to brainstorm ideas for solving problems such as child care needs and looking for the area’s strengths to showcase. In Hustisford, residents pointed to assets such as Sinissippi Lake and a local café-ice cream shop.

“That spoke to me—how important it is that they support their local businesses and nature areas,” Kietra says.

Group meetings such as those in Hustisford quickly reveal the local heroes, the people who may not stand out in a crowd but are the residents who know their community and work to accomplish goals. “They are the local champions within the community. These are the people who are getting things done. Those are stories I love to tell,” Kietra said. “And then the question is: How can we copy what they’re doing and share it with other communities?”

Getting to know Kietra Olson behind the scenes

Her home: The timber frame house, built by Tom Holmes, of Baraboo—with help from Kietra’s father and his friends and relatives—features exposed beams and carvings in the timber, and is held together by wooden pegs, not nails. The lilac hedge and maple tree came from her grandmother’s house in Jefferson. “This is the land I was raised on. It’s where I learned to plant trees and garden and cook.”

Early career aspirations: “As a kid, I wanted to be a witch and a glassblower—that was before (the musical) ‘Wicked’ came out. In high school, I thought I’d work for the Department of Natural Resources, as a forester … Then, my French teacher Mark Voss was an inspiration to me. He taught us the language, and he taught us about . He oversaw the construction of our school garden, and he taught us about good food, good company and good vibes. I learned that the intersection of community and the environment was my starting point.”

Favorite hobbies: Kietra is a trained herbalist who grows her own herbs and makes salves, infusions and floral waters, with a focus on Nordic herbalism, taught by her grandmother; she also is a silversmith and jewelry maker.

Favorite foods: Green tea; my mom’s beef bourguignon; M&Ms that have been heated in the microwave, accompanied by a glass of milk; anything spicy—especially Mexican food; homemade pizza on the grill

Weirdness: “I don’t know how to measure it on the weird scale, but if you’re not weird, you’re doing something wrong. I hope I don’t come off as weird, but that I have an endearing weirdness when you know me.”

Kietra says experience has shown her that many rural businesses have a hard time finding resources. She hopes to change that: “I hope rural Wisconsinites feel they have the attention and resources from the state and federal governments that they deserve. I hope that they feel seen and valued. I hope the Office of Rural Prosperity can help rural Wisconsin thrive in a way that will help the entire state flourish. It would be great if Wisconsin could be recognized as a rural powerhouse.”